RPAC were strongly represented at the London Marathon yesterday with a team of 13 runners and 29 volunteers taking part (hopefully I have got the numbers correct).

The volunteers had an early start, assembling on Blackheath at 06:15. Donna gave us a quick briefing before we divided into three teams lead by Paddy, Stav and Roger and headed over to the red start. With the staggered wave starts this year there was a constant stream of runners heading for the start and the final person didn't cross the finish line until around 11:00. It was very well organised with each wave being walked up to the gates of Greenwich Park by a line of marshals.
Despite the changes the questions were still the same as in previous years: "Are there any toilets near here?", "Am I going the right way to the red/blue/green start?", "Where is a good place to watch the runners?", "Can I run with my friend (who is in a different start)?" (No!), "I couldn't get to the Excel to pick up my race pack because of the fuel situation, where can I pick it up from?" (You can't, you can't run!).  There was a moment of excitement when we had to call the Police to investigate a bag that had been abandoned on a bench  - it turned out to be full of old clothes discarded, I imagine, by one of the runners.

For the first of the RPAC runners the race started soon after 09:30 with Tom Almond and Lee Savage getting away pretty quickly. Kate Knight by comparison did not start until 10:53.

Full results will be available in the Senior Results section shortly but here are some of the highlights.  Please let me know if I have not picked up your result..

Tom set a new club record in the senior men's category, finishing in 2:28:30 (thereby beating his previous club record by some 8 minutes) and finishing in 59th place overall. He did this despite not being able to keep down water or gels from mile 14 and having horrendous cramp from mile 20. A really gutsy performance Tom (no pun intended) - well done to you sir! Mike Pocock also set an new club in the men's V65 category, finishing in 3:21:28, beating the previous record (held by Mike!) by 7 minutes and finishing 6th in his age group. You are a phenomenon Mike! Rick Coles and Lee Savage both set new PBs and finished comfortably under 3 hours - well done guys! It was a first marathon for Laura Ebbs who finished in an amazing time of 3:08:42 - wow!

In addition to those running in London we had a couple of Virtual London Marathon runners too. This was a first marathon distance for Mike Wylie who clocked 3:04:05 around Dorking and feels that with some specific marathon training he has a lot more to give. Liz Bourns ran a 4:32:09 whilst on holiday in Greece...probably pretty warm and hilly I imagine.

Here are some photos from the day. 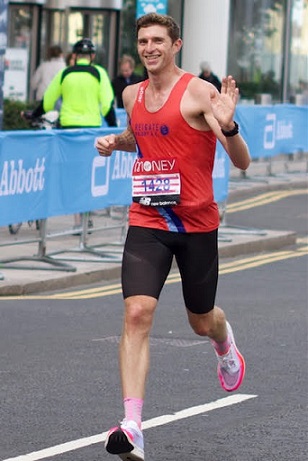 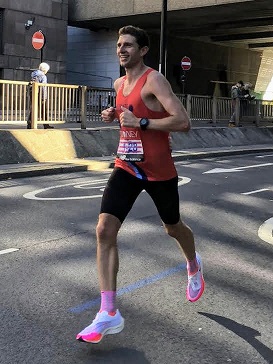 Tom Almond powering his way to the finish. 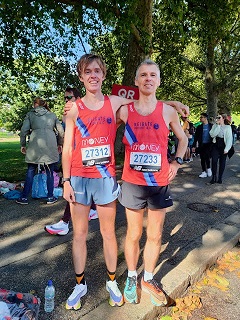 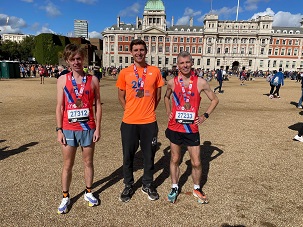 Lee Savage and Rick Coles at the finish. Lee, Tom and Rick on Horse Guards Parade - Rick said that Tom was so far ahead that he'd managed to change before they got there. 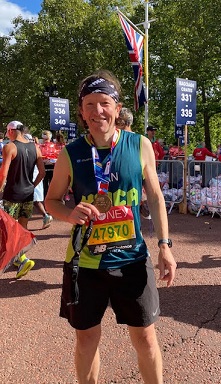 Ian Burks looking very pleased to have raised £4192 for the YMCA. If you'd like to add to his fundraising total you can do so here. 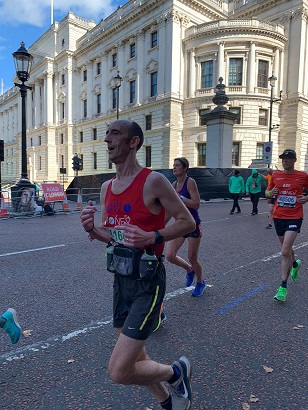 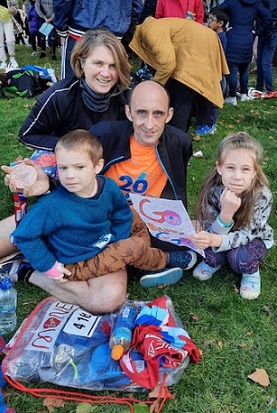 Ian Stammars in Birdcage Walk - just 1km to go! Ian with his support crew at the finish. Ian says that he's never going to run another marathon - until next year! 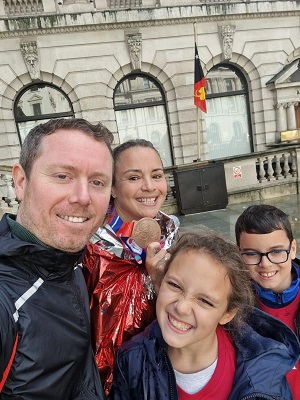 Karima Graham and family at the finish - a new PB for Karima. Well done Karima! 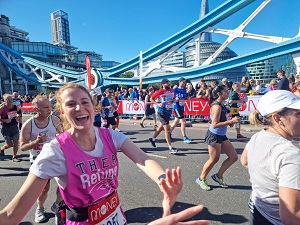 Thea MacDonald at Tower Bridge - Thea said that she was overly optimistic for how the second half of the race would go... I think I'm right in saying that it was a first marathon for Thea. Well done Thea! 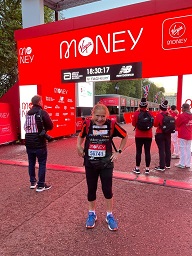 It was definitely not a first marathon for Kate Knight  - number 85 to be precise - well done Kate!