Apologies for the late publication of this week's newsletter; it was my daughter's graduation yesterday so I'm afraid that I ran out of time.

We're planning to hold a social event at the Battlebridge track on the evening of Tuesday 30th August. This will be a picnic and we're looking into whether we can get any local food vans along for the event.
We're planning to hold the Grand Prix Mile and also some mixed Junior and Senior 4 x 400m relays on the night as well.
We'll provide more details through the newsletter nearer the time.

Saturday 24th September  - quiz night for a cause

Charlotte Pekekani is organising a quiz night to raise funds in order to attend the International Scout Jamboree in South Korea on Saturday 24th September at St. Mark's Church Hall.
See details below... 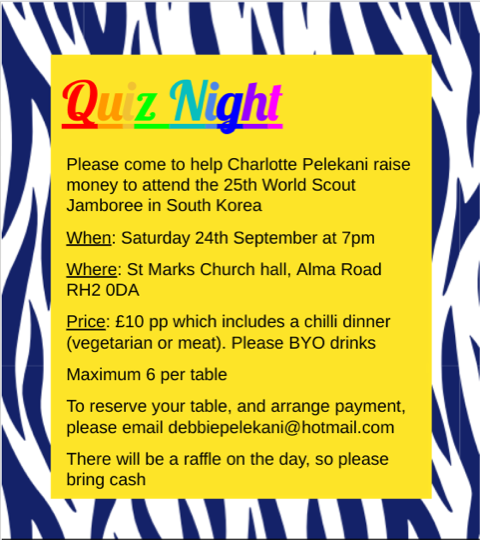 I'm keen to try to put together a potted history of our club. We know of course, that it was founded by our club president John Hopkins, but not very much more than that. I have recently had the pleasure of chatting to Rita Diffley who was one of the founder members of the club (there is a picture of her before the 1987 London Marathon here), and at one time the club's high jump coach. Rita was kind enough to share some anecdotes from the early days of the club and she also has some copies of some very early club newsletters dating back to 1983. More of this to come, but if you know anything about how, why and when the club came into being, or you can share some stories from the early days of the club please get in touch

Give us your results please

If you run in an event, do please let us know your results by emailing

. If possible please can you submit them by Sunday evening at the latest as this allows us to meet the deadline for the Surrey Mirror sports pages.

It's been a quiet week for the Junior Section this week - maybe because of the start of the school holidays.

Dates for the Diary

The remaining fixture for this season is 27th August at Sutton

It is the third of the SLH NADI races on Thursday so this week's session in Priory Park is cancelled to allow people to run this instead.

We're currently lying in second place in the league so it would be great to get another strong turnout from RPAC for this event.

This is always a good event which starts and finishes at Wimbledon Rugby Club. It's close to the A3 so it's easy to find for a change AND there's lots of parking.

The bar is open and there is some usually free snacks so we can have a bit of a social afterwards.

Meet in Bell St Car Park for a prompt departure at 18:00 for car sharing and lifts. Please let me know if you are able to offer a lift to someone else, or you need a lift

Dorking and Mole Valley AC have very kindly offered us the opportunity to participate in their Winter Handicap series as we did pre-Covid. We will be running this as the Jimmy James Handicap series again.

There is a slight change to procedure as Dorking have asked us to pre-register the week before each race. A number will be issued to each athlete which they keep for the season. I'm told no registration, no race! The races will be held on the last Thursday of each month starting at 7pm from September through to March. For the initial registration you will need to provide a current 5K time, email address, mobile and ICE info.

I hope this works for everyone.

Steve Smith reports that lots of teams had limited numbers. There were only 2 teams in the women's relay. A lack of officials meant that the triple jump had to be cancelled. Despite this, it was a good meet and there were lots of strong performances from the RPAC team. The highlights were Nick Wade winning his 5000m race in 20:08.3 and Gavin Lawrence and Steve Smith winning their javelin categories with throws of 26.67 and 24.83 respectively. Andrew Pringle and Alistair Swanepoel competed in the 200m. Well done to you all!

Well done to Ben Stanton, Jez Greenwood, Jon Payn and Jim Vince who completed the Surrey Slog Half Marathon on Sunday. The course is tough - three times up Holmbury Hill and it was hot. I think I had the right idea as I was in the shade manning the water station! 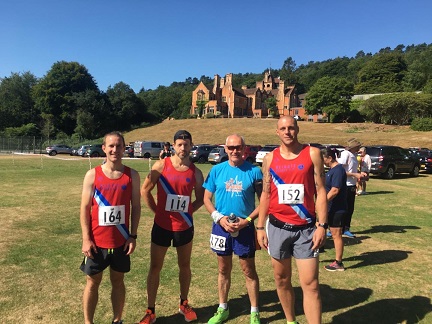 Provisional results are here  and there are some more photos here

Over the course of 16th-17th of July Conner Wickens rounded off this year's  Spartan series of races and was crowned age grade champion.

Conner gives an update on his season.

"The Spartan Race series is made up of four different events in three different locations.

Henley on the Thames was the first event of the season and ‘the Beast’ race was the first event. This is the equivalent of a half marathon with 30 obstacles. Considering that I failed 3 obstacles on this event I manage to scrape first place! Day 2 of the Henley weekend was the ‘Sprint’ race; the equivalent of a 5k with 20 obstacles. As you can imagine this was a quick race and having done the race the day before I had heavy legs but when you get to the start line the adrenaline takes over! I managed to get a big win by 5 minutes in that race!

Series race 3 was in the Brecon Beacons in Wales. I knew this was going to be a tough one for many, as the ‘the Beast’ race in Wales has the most gruelling terrain out of all the events. Even though I was a bit late to the start line I manage to fight my way to the front and to get a good lead and I came away with a win! After this event the total of the leader board for the series was 3000 points in my favour.
Race 4 was up in the Midlands and was the ‘Super Race’, which is the equivalent of a 10k with 25 obstacles where I came in second place. I raced the competitive Beast race the day before and although this wasn’t part of the series I landed 1st place in that one.
The prep going into this season was fantastic, definitely left no stone unturned. Next season I will be stepping up to the Elite category where I will be hunting down the big dogs."
Well done Conner! 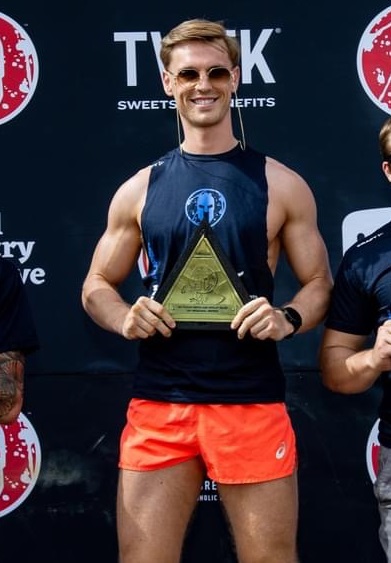 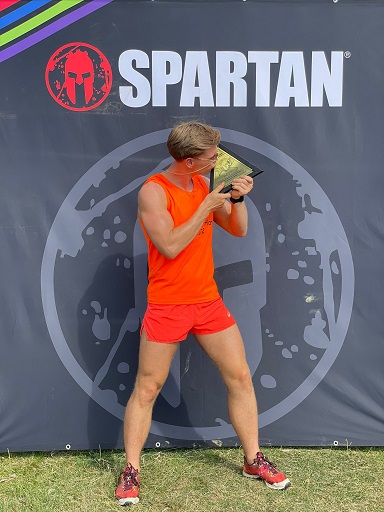 Congratulations to Liz Mason who completed her 500th Parkrun at Banstead Woods on Saturday. Liz clearly likes Banstead Woods as she has run all but twelve of the 500 there. She ran her first Parkrun on 1st August 2009.  I'm sure she won't mind me telling you that she was faster on her most recent Parkrun than she was on her first. Well done Liz! 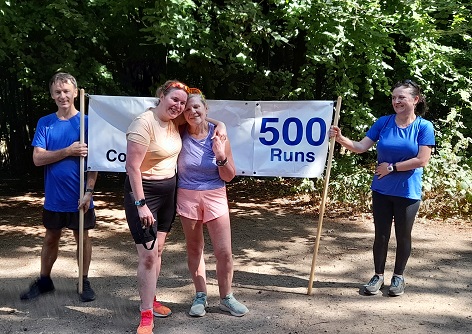 Kate Knight completed her 106th marathon (or more) over the weekend, taking on the Yorkshire 100km Ultra Challenge. She reports that it was very hilly, stony and rocky in places, but she's very pleased to have done it again. Well done Kate. You are a phenomenon. 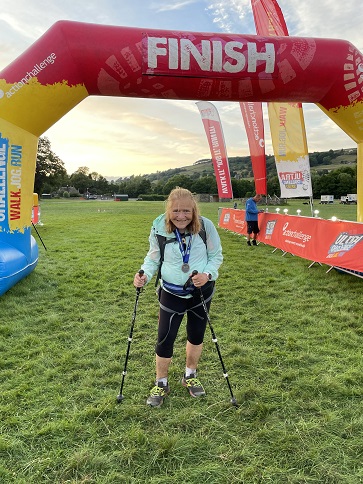 Paul and Sarah Walters are away at the moment. Paul writes:

"Sarah and I are up in Nottingham. We were going to run Woolaton Parkrun but it was cancelled due to setting up for another event in Woolaton Park, so we decided to try Bestwood Village Parkrun. We were a bit apprehensive as on the walk to the start a chap told us that it was in the top 10 parkruns in the country for difficulty. We ran together. Sarah showed some tenacity up the hills, walking up the severe bits (like everyone around us) and we finished inside 40 minutes. A demanding but really friendly event, and highly recommended if you are ever in the area.

By the way, the parkrun is on the site of an old colliery." 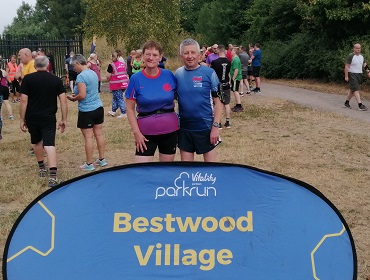 Dates for Your Diary

Please let us know if there is anything you'd like to see in the newsletter.

If you wish to get in touch our email address is

It’s that time of year again! Time to ask for your help in volunteering at the Start area at the London Marathon on Blackheath/Greenwich Park, bright and early on Sunday 2nd October 2022.   This year, we are looking for just 30 volunteers. And as...
Read more...